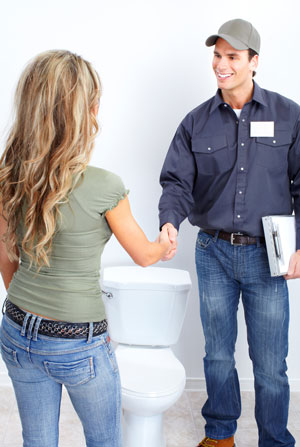 The Manitoba Hydro Power Smart Residential Loan is a convenient and affordable financing option if you want to make energy efficiency upgrades to your home. Each loan applied to different upgrades and has specific eligibly requirements. Badger Creek Plumbing & Heating are qualified to offer services for residential space and water heating equipment.

For more information and to see if you’re eligible, please call our office at 204-717-4880 or visit the Manitoba Hydro Power Smart Program website.

1. Are you having troubles with your caulking around the tub peeling away?

Peeling away of caulking can be caused by the weight of the full bathtub stretching the caulking too much. To prevent this from happening, fill the tub with water before you apply the caulking.

2. I sometimes use chemical drain cleaners to keep my drains running. Is it okay to do this?

If there are no problems with your drains, it is probably a good idea not to use these chemicals. Use of harsh chemicals in piping can cause significant damage and other problems. Doing so may cause you to need professional assistance sooner than anticipated. Most of the chemicals on the market are caustic and not biodegradable and although diluted in the drains their use eventually affects water quality in the local river.

3. What are the benefits to getting a low flush toilet?

There are a number of benefits to getting low flush toilets. Firstly, the new standard is a 4.5 litre toilet whereas the older standard was 13 litres, so you are using much less water and so reducing your home water bill. There are toilets that use a lot more water, normally in much older homes.

4. I’ve noticed my toilet has started to wiggle/rock, is this issue serious?

If you are noticing any movement of the toilet, it will only be a matter of time before it leaks. So have it looked at as soon as possible: your plumbing professional will be able to say whether or not it was leaking at that point and also inspect the condition of the rest of the toilet.

5. I can hear water running when I enter the bathroom but I cannot find any taps running or any signs of a leak. Is this something I should worry about?

Chances are the toilet is the source of the water running. Water can run from the tank to the bowl without any signs of a problem. While this isn’t a leak, it is a huge waste of water. You should have the parts inside the tank looked at or you could end up with a large water bill.

6. How do I prevent the city sewer lines from backing up into my home?

This is caused by more rain than the sewers can cope with and this occurs particularly in spring with the run off. Install a back water preventer onto your main waste pipe in your basement can help prevent damage to your home.

7. My shower head does not have the power it used to. What would be causing this?

1. What size or type of air conditioner should I purchase for my home?

There are several factors that affect what size and type of a/c unit is most suitable for your home. The only way to ensure you get the best solution is to have your home evaluated by a professional.

How do I know if my current a/c unit is the right size for my home?

Bigger isn’t always better; performance and efficiency are what count. Before purchasing a replacement system, you should always have a professional make sure your system is sized properly to match your needs and budget.

3. How much does a new a/c replacement system cost?

Due to the a wide variety of different makes and models available, as well as customer desires, price is an issue that can only be solved by doing a thorough evaluation of your home and its existing equipment.

4. Is there anything I need to check before scheduling my a/c maintenance service?

If it’s not working, check to ensure that the a/c is turned on. If so, check that the breakers and the disconnects are turned on and be sure the thermostat is set correctly. Also, take note of any unfamiliar noises or smells coming from the unit.

5. How often should I have maintenance done on my air conditioner?

You should get maintenance done on your a/c system at least annually – spring to early summer being the best times. This not only ensures maximum efficiency, it enables your technician to foresee any possible problems that may occur in the near future.

1. How can radon affect my health?

Radon gas and radon progeny in the air can be breathed into the lungs where they breakdown further and emit “alpha particles”. Alpha particles release small bursts of energy which are absorbed by nearby lung tissue. This results in lung cell death or damage. When lung cells are damaged, they have the potential to result in cancer when they reproduce.

Other than lung cancer, there is no evidence that radon exposure causes other harmful health effects such as any other form of cancer, respiratory diseases such as asthma, or symptoms such as persistent coughing or headaches.


2. I am a smoker. Does radon affect me more than a non-smoker?

Yes. The risk from radon exposure for a smoker (including those exposed to second hand smoke) is much greater than for a non-smoker. For example, if you are a lifelong smoker but are not exposed to radon, your risk of getting lung cancer is one in ten. If you add exposure to a high level of radon, your risk becomes one in three. On the other hand, if you are a non-smoker, your lifetime lung cancer risk at the same high radon level is only one in twenty.


3. Where in Canada are radon levels the highest?

Radon concentrations differ greatly throughout Canada but are usually higher in areas where there is a high concentration of uranium in underlying rock and soil. Radon is found in almost every house, but concentration levels will vary from one house to another, even if they are similar and next door to each other.

4. How can radon get into my house?

A house can act like a vaccum for underground gases. The air pressure inside your house is usually lower than in the soil surrounding the foundation. This difference in pressure is caused by things like the use of air exchangers, exhaust fans and clothes dryers. When air is pushed out of the house, outside air is pulled back in to replace it – much of the replacement air comes from the ground surrounding the house and brings gases such as radon with it.

Radon can enter a house any place it finds an opening where the house contacts the soil: cracks in foundation walls and in floor slabs, construction joints, gaps around service pipes and support posts, floor drains and sumps, cavities inside walls, and the water supply.

The only way to find out if your house has a radon problem is to measure the radon concentration inside it.


5. How can I reduce the amount of radon in my house?

The most common and effective radon reduction method is Active Soil Depressurisation (ASD); a method where a hole is drilled in your basement floor and a pipe is installed with a fan that draws the radon gas from under your house and pushes it outside.